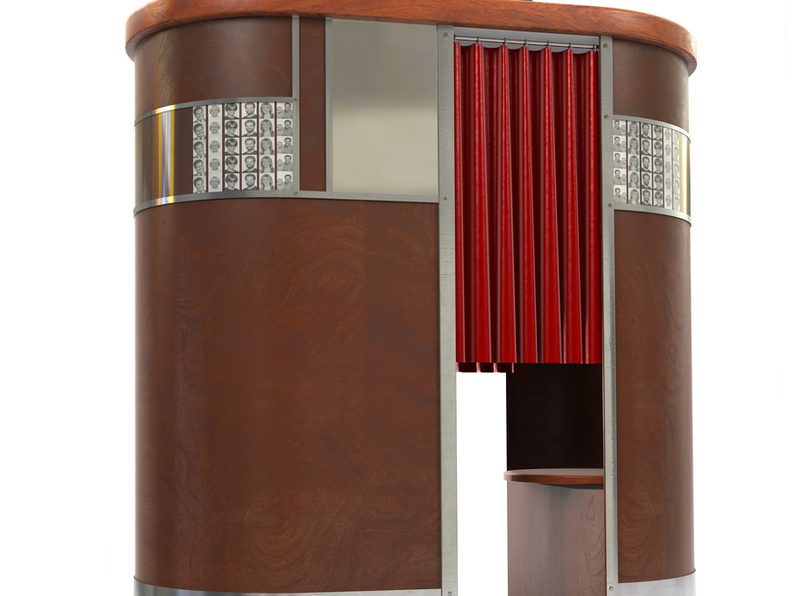 Taking a Look Back: The History of Photo Booths

Without a doubt, photo booths have come a long way. The earliest concept of a photo booth was first introduced in the World’s Fair in Paris — in 1889! The concept wouldn’t hit the United States until the late 1920s, when it was called a Photomaton. Everything at first was printed in black and white, and it would take another 40 years before the photo booth was able to offer color photos. And, of course, it took a while after that before the terms “digital” or “social media posts” became a part of the common photo booth language.

Like so many other popular inventions, the photo booth has changed dramatically since its humble origins, and technology has only made it better. Today, photo booths are enormously popular at social gatherings, whether it’s an office party, wedding, bar mitzvah, pool party, or holiday gathering. Today, anyone who uses a photo booth can instantly share their photos with millions of people around the globe, courtesy of social media.

How Did the Photo Booth First Get Invented?

It’s safe to presume that no one involved in the first photo booth in 1889 knew it could one day take color photos where you can add digital props or change your background. But that’s progress.

The first patent for the “Auto-Photo” was in 1889. At the Paris World’s Fair, a coin-operated device was introduced that could make an exposure and deliver a framed ferrotype —  a photo transferred onto a thin sheet of metal — in 5 minutes. However, the magazine La Nature would write, “A portrait could barely be seen and was often unrecognizable.”

From those humble beginnings, the Auto-Photo started to get better, and the technology would make its way to the United States in 1925 when a Siberian immigrant named Anatol Josepho unveiled a fully-automatic photographic machine near New York City’s Times Square.

Calling it the Photomaton, Josepho discovered he had a hit, with people lining up for blocks and waiting hours for a chance to have their image captured in a photo. It was also the first curtain-enclosed photo booth in New York City. The difference between the Auto-Photo and the Photomaton was that Josepho had discovered a way to print much higher-quality images. And back then, it took about 8 minutes to process your photos.

How Did Photo Booths Become So Popular?

Within the next few decades, photo booths spread across the United States, Canada, and Europe, and whenever they popped up, people flocked to them. That included everyone from regular folks to actors, celebrities, and even presidents.

Artists in particular became fascinated with photo booths. The surrealist Salvador Dali and the film director Luis Bunuel produced self-portraits using photo booths. Artist Andy Warhol did the same in the 1960s, incorporating photo booths into his art. In 1968, users could start operating the photo booth themselves, without the need for an attendant who would adjust the lens and recommend how people should pose for their pictures.

By the 1970s, the technology had improved and color had replaced black & white ink. After that, the next revolution came in the 1990s, when a company called Photo-Me introduced digital color photo booths using a computer to print the strips. The photo booth had entered the high-tech age.

Today, photo booths are popular for providing instant digital photos that can be emailed to you and then shared within seconds on social media sites. It’s safe to say the earliest innovators never expected terms like smartphone, Instagram or likes and shares would play such an important role in why we all love photo booths.

Choose Cut Above Photo Booths for Your Next Event

If you’re ready to plan a party or other social gathering that your guests and employees will love, choose a next-generation photo booth from A Cut Above Photo Booth Rentals. We’re proud to provide custom photo booths for weddings, parties, and corporate events in and around Orlando. Choose our Magic Mirror Photo Booth that blends in with its surroundings. Then you can custom-brand it to stand out at your event. It’s the best option for fun with your guests.

To get a head start on planning the most memorable event of the year, give us a call at 800-295-0430 today or visit us online to reserve your date!